Some people don’t even realise that there IS a village here. Well… they’re missing out. Freshwater has the longest high street in the country and you’ll find some lovely traditional shops such as the butcher, baker, fishmonger, and a grocer’s that has been in the same family for five generations. These institutions are interspersed with independent stores offering everything from bamboo toothbrushes to vintage books. There’s even a dog grooming parlour here, so have a take-out pumpkin latte and homemade cake from one of the brilliant coffee shops and book Rover in to have his shampoo and set!

Some people don’t even realise that there IS a village here. Well… they’re missing out. Freshwater has the longest high street in the country and you’ll find some lovely traditional shops such as the butcher, baker, fishmonger, and a grocer’s that has been in the same family for five generations. These institutions are interspersed with independent stores offering everything from bamboo toothbrushes to vintage books. There’s even a dog grooming parlour here, so have a pumpkin latte and homemade cake at one of the brilliant coffee shops while you wait for Rover to have his shampoo and set!

Say hello to some of Freshwater’s shopkeepers 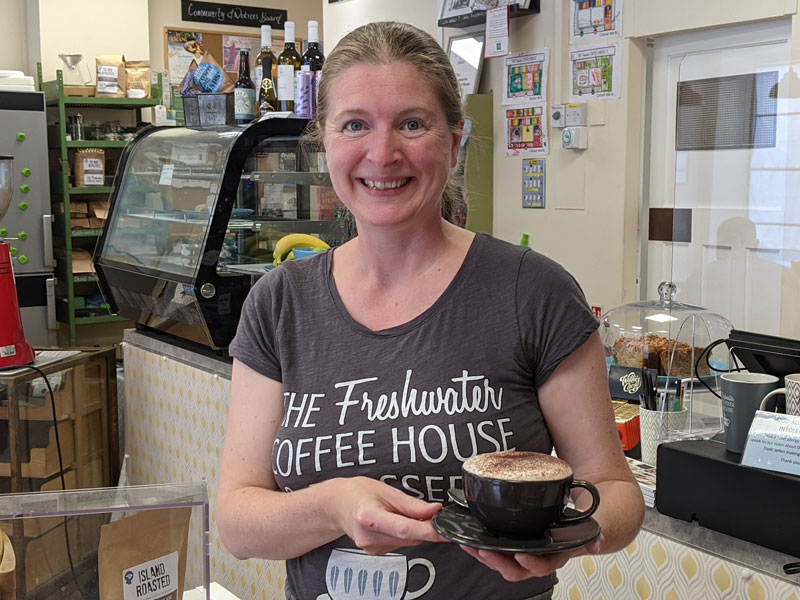 Becky and Stefan Powell are bankers turned bakers. A few years ago, the couple moved from the Cotswolds to set up the Freshwater Coffee House. Their cafe on School Green Road specialises in homemade food, speciality coffees and signature cakes such as their square Victoria sponge. TripAdvisor has rated their Coffee Shop as being in the top 10% of places in the world for travellers to stop... Read more...

“We used to work in banks and started to get fed up with the corporate life – we had the big house and the cars but we were working long hours and not seeing each other. We were drawn to the Island, and a more relaxing life by the sea, so we moved here in 2016. My husband had always wanted to work in a coffee shop, but he had no experience and couldn’t get work – so we set up our own!

“The Freshwater Coffee House has been open for two and a half years. Our food is simple and uncomplicated, it’s honest and inspired by our travel and friends. We take our coffee and tea very seriously, with our own blend of Island Roasted Coffee, Briddlesford milk and a range of vegan milks too.  We love what we’re doing, chatting to people and making them feel special, and we’d do it all for free if we could!

The Island is also an amazing place for our children, Willoughby, eight, and Vera, two. We home educate them, and so it’s a massive challenge balancing the needs of the business with the needs of the children, but we want them to be with us on this journey. We all love being able to go to the beach after work, the coastline here is fantastic, and the open countryside is amazing.

“We try to support local businesses – it’s all about supporting each other – so we get bread from The Village Bakery, go to Hurst’s for bits and pieces, and Rainbow Fish Bar for fish and chips at the end of the night. Sometimes people don’t even realise there is a village of Freshwater, they think it’s just the Bay, but there are so many lovely little independent shops, all the way down the high street. Plus there’s all the traditional shops too. A butcher, baker – and although there’s not a candlestick maker, you can get candlesticks in Hurst’s!

“It’s easy to take your local shops and cafes for granted but they’re so important for the community. They contribute to local jobs and the older people love seeing familiar faces. Cafes like ours give people a place to pause – and if you can’t do that then you’ll go elsewhere or shop online. Plus you can get one of the best cups of coffee on the Island!

“It’s been a challenging year, with Coronavirus, but a crowdfunder helped us to raise £20,000 which gave us a lifeline, and we’re so thankful that coffee has bought so many people into our lives.”

· Octopus Workshop Inc – they make amazing stuff, with lots of recycling and repurposing which is close to our heart, so we like to have a mooch in there.

· Elliotts newsagents – there’s nothing that they don’t sell! 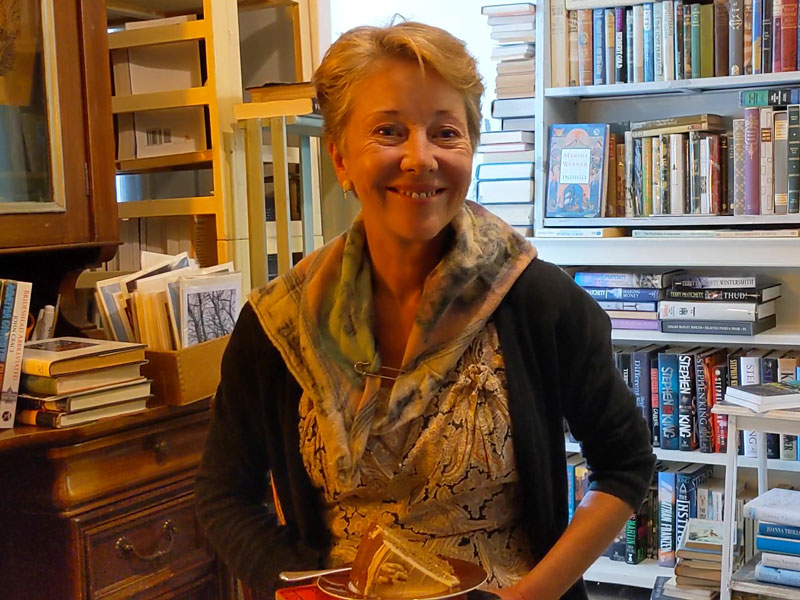 This is the extraordinary story of Gail Middleton, a former model who now runs Mrs Middleton’s Shop - a fabulous emporium for antique and new books. Gail, who’s a former model with Select Model Agency, and a knitwear designer for John Galliano, moved here in 2012, with her late husband and youngest son... Read more...

“I moved here in 2012, with my late husband and youngest son. I was supposed to be going to work at a Fashion House in Paris again, but my phone messed up and I didn’t receive any messages for a month. This meant missing a season and by then I had a dog and was happily working in a bookshop. I had no desire to take up my former career, and so plunged headlong into apprenticing myself in bookselling. In 2015 I opened my first bookshop, followed by a second in 2016.

“I always fancied the sort of place where people could drink coffee and read the books, and that’s what you can do here. All day every day, people come in and take centre stage – being around books seems to make them talk.  Everyone has a story to share and I love that openness and nostalgia.  Actually it’s a kind of magic!

“I source rare books for my customers and I am frequently asked for a childhood favourite with a red cover. “You’ll know it!” they say, “it has beautiful illustrations!” Nine times out of 10, it’s Charles Kingsley’s ‘The Water Babies!’

“In 2019, Marianne Cheung set up Whistle & Hound next door, and early in 2020 we decided to turn one of my shops into a joint-venture – The Rabbit Hole Chocolate Shop and Patisserie. The decision to join together was based upon turning our little shops into a ‘Parade’, a destination that made parking up and visiting an experience. We love the ‘indie vibe’ here in Freshwater that has seen the High Street buck the Nationwide downward trend, and we wanted to embody this further by adding to it.

“Shops like ours are a resource for the whole community – and we’ve run storytelling sessions, poetry readings and hosted other live events. Shopping locally makes common sense too – for the local economy, and the wider economic and eco systems too.”

· Why not try a cup of single estate leaf tea from The Rabbit Hole – there are 18 to choose from, exclusively sourced from the best tea plantations. You can savour the flavour of each different tea, it’s such a rarefied taste.

· A relaxing linen and silk eyemask with lavender and linseed, handmade by Marianne at Whistle & Hound. At £10, it’s affordable luxury. They’re perfect for relaxing after yoga.

· Or a Gaia Gourmet vegan cookbook from Mrs Middleton’s Bookshop.

· The Piano Café in Freshwater – for great food and ambience! 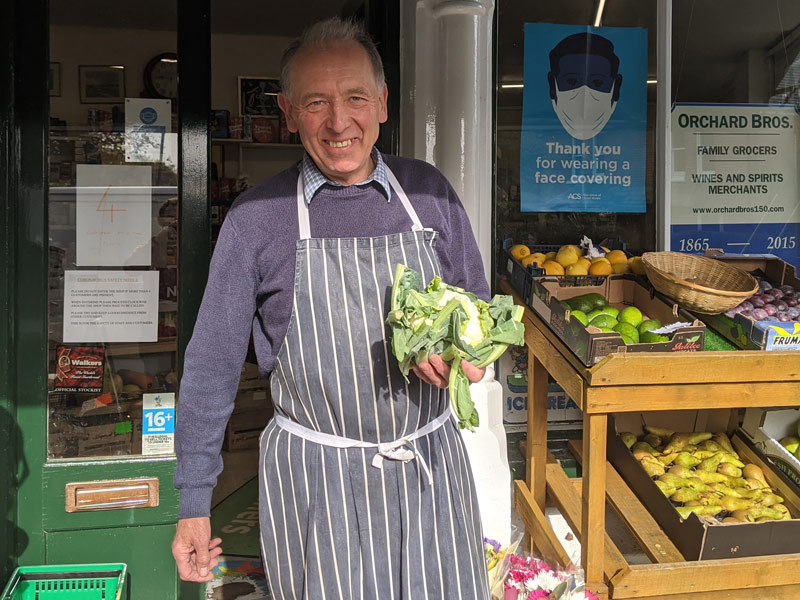 Orchard Bros is a traditional grocer’s and convenience store that has been referred to as the 'backbone' of Freshwater. It’s a family run store and the current owner Mark Orchard is the fifth generation of Orchards to manage the local landmark. Read more...

For 50 years, Freshwater folk have known where to find Mark Orchard: hard at work at Orchard Bros, a traditional grocer’s and convenience store that’s been in the same family since 1865. Customers have included two Prime Ministers, and the family of Sherlock star Benedict Cumberbatch. They’ve all visited the institution to stock up on local goodies and essentials including fruit, veg, milk and cakes.

Orchard Bros got through the 1970 invasion, when thousands of visitors descended on the village, for the iconic Isle of Wight Festival at Afton. That was Mark’s first shift. And now this year, they’ve got through one lockdown, they’re getting through the second, and they’re still going strong. But it’s been tough!

Mark says: “I’ve worked my way up from filling shelves to running the store, and I’ve worked harder this year than in all my life.”

“The beginning of 2020 was quiet, but suddenly we went into lockdown and all the shelves were stripped. First it was toilet roll, then pasta, then tinned tomatoes and then everything was gone! We had to use our imagination and went to places like Medina Foods that were happy to sell us big bags of flour and other things that people wanted but couldn’t find.

“Then suddenly people wanted deliveries because they didn’t want to go out and we were doing 60-70 deliveries a week. It was logistically very hard work, as we’re a small business, and I did think about shutting up. I had two or three nights where I didn’t sleep – but then I realised that people needed us.

“It’s important for people to shop locally. I don’t expect people to buy everything in my shop but if you don’t use it, you lose it, and then people will moan that there’s no shops around them! We offer a big range of products – there’s not much you can’t get – and we give good advice. We try and sell as much local produce as possible, such as local milk from a farm near Shalfleet, and all kinds of fruit and veg including asparagus, runner beans and tomatoes. We sell some unusual things too that you won’t find in a supermarket – like our home cooked ham, which is so popular that I make one or two a day, and more around Christmas. Our organic range has got bigger and bigger as more people are interested in healthy eating now. And if I’m asked for anything, I can get it in.

“Our customers over the years have included two former Prime Ministers – Ted Heath (we had a letter from his secretary thanking us) and James Callaghan. The actor Benedict Cumberbatch is a customer too. Before the lockdown his mother in law used to come in and get all the nice things for the family! They like organic food and anything healthy.

“All our customers are important to us. Since the lockdown, we’ve seen a lot of new faces – for example young people who don’t want to go to the supermarket or are now working at home. We’re pleased that they’ve found us because we’re doing our best!”

· All our wine – but a favourite is Pinot Grigio

· Granary bread and rolls from The Village Bakery in Freshwater

· Beef from Warren Farm in Totland

· Mermaid Gin made by Isle of Wight Distilley – we’ve sold a lot of that this year, you can’t beat it, and the visitors like to take some back home as presents. 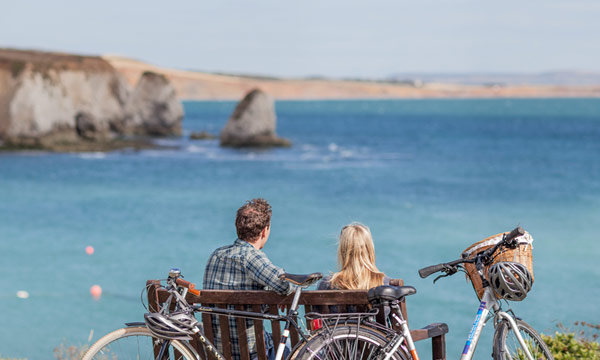 Grab a picnic and cycle around Freshwater Bay. Or get a pizza delivered to you on the beach by Pizza Fuoco. You could also try the cycle path to Yarmouth – it’s very scenic and flat, so perfect for beginners! 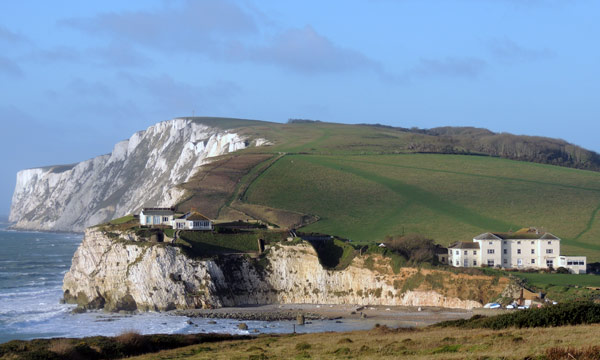 Walk up an appetite

Head for the top of Tennyson Down, where the ghost of poet Alfred, Lord Tennyson, can apparently be seen in a long swirling cape. Even if you don’t bump into him, you’ll get amazing views over the dinosaur coast.